Who was Norman Rayford? 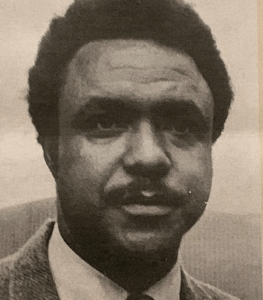 Norman Rayford, vigorous, enthusiastic, compassionate, and acutely aware of society’s ills, was one of a core group of dedicated unionists who, led by President Henry Nicholas, was responsible for the early organization of 1199C. Tragically on August 28, 1972, Norman’s early promise ended when he was shot and killed by a hospital guard on the grounds of Philadelphia’s Metropolitan Hospital.

Norman had gone to lend his support to a picket line at the hospital that had been set up in connection with a strike of 1199C workers at Delaware Valley Hospital Laundry, which was partly owned by Metropolitan Hospital. As Norman approached the hospital at 8th and Race streets, he was confronted by a hospital guard who subsequently shot him to death. His wife Kathy, was pregnant with their first child at the time of his death.
By the time Norman died, thousands of hospital workers in the city had voted for 1199C, but management at most hospitals had successfully managed to stall any negotiation of union contracts using a series of legal maneuvers. Norman’s death resulted in an outpouring of anguish and anger from health care workers and social activists that culminated in a memorable march through the city of Philadelphia to the site of his death. That show of strength—the result of Norman’s death—forced hospital management to finally sit down at the bargaining table.

Ironically it was those first contracts that made August 28th, now known as Norman Rayford Day, a paid holiday for all 1199C members.

While he was alive, Norman fought tirelessly to win union rights for hospital and nursing home workers in the Philadelphia area. Death did not stop his fight. To this day we at 1199C continue to fight for the rights of hospital and health care employees.

We have dedicated ourselves, in his memory, to the cause of bringing hope to healthcare workers everywhere.